Pilecki was fully exonerated posthumously in the 1990s. Today he is regarded as one of Poland’s heroes.

“A historical document of the greatest importance.” The New York Times, Editors’Choice

“One of the ãFive Best’ books on wartime secret missions.” – Wall Street Journal

“ExtraordinaryãÎ deserves to be read alongside the accounts of Primo Levi and Elie Wiesel.” – The New Republic

Captain Witold Pilecki (1901-1948), a cavalry officer in the Polish Army, was one of the founders of a resistance organization in Nazi German-occupied Poland during World War II that quickly evolved into the Polish Underground Army.

Pilecki is the only man known to have volunteered to get himself arrested and sent to Auschwitz as a prisoner. His secret mission for the polish Underground: smuggle out intelligence about this new German concentration camp, and build a resistance organization among the inmates with the ultimate goal of liberating the camp.

After the war Pilecki, who was married and the father of two children, volunteered to return to Poland to liaise with the anti-communist resistance organizations and report back on conditions within the country. He was captured by the postwar Polish communist regime, tortured and executed in 1948 as a traitor and a “Western spy.” Pilecki’s name was erased from Polish history until the collapse of communism in 1989.

Pilecki was fully exonerated posthumously in the 1990s. Today he is regarded as one of Poland’s heroes. 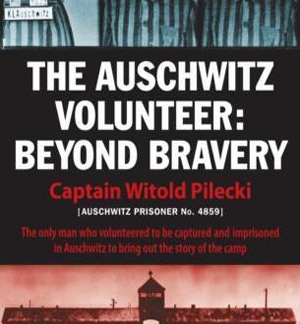