ŌĆśInsistently asks the question: What would you do? Would you fight, or acquiesce, or collaborate?… Karski was deeply patriotic and ludicrously braveŌĆ” an astonishing testament of survivalŌĆÖ ┬ĀBEN MACINTYRE, AUTHOR OF AGENT ZIGZAG AND OPERATION MINCEMEAT

It is 1939. Jan Karski, a brilliant young Polish student, enjoys a life of parties and pleasure. Than war breaks out and his familiar world is destroyed. Now he must live under a new identity, in the resistance. and, in a secret mission that could change the course of the war, he must risk his own life to try and save those of millions.

ŌĆ£If you wish to read about a man more courageous and honourable than Jan Karski, I would have no idea who to recommendŌĆÖ ALAN FURST

ŌĆśReads like the screenplay to an incredibly exciting war moving – but it is all trueŌĆÖ ANDREW ROBERTS, AUTHOR OF STORM OF WAR

Jan Karski was born 24 June, 1914, in ┼ü├│d┼║, Poland. He received a MasterŌĆÖs degree in Law and Diplomatic Science in 1935 and then served in various diplomatic posts in Germany, Switzerland and Great Britain.

At the outbreak of World War II in 1939, he became a POW of the Red Army. Two months later he escaped and joined the Underground Polish Army, repeatedly crossing enemy lines to act as a courier between his occupied nation and the West. Prior to his last departure from Poland, he was smuggled into the Warsaw Ghetto and a concentration camp in order to report to the outside world. In November 1942, he delivered an impassioned plea on behalf of what he had witnessed was published in 1944 and became an immediate bestseller.

In 1954, he became a citizen of the United States, and a successful academic. After the fall of communism KarskiŌĆÖs wartime role was officially acknowledged in Poland. Karski died in Washington, DC, in 2000. 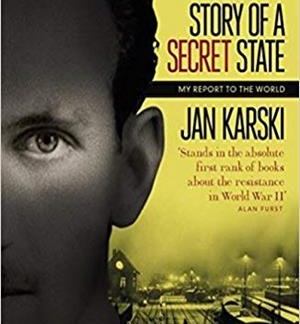